Did someone say free SSL certificates? 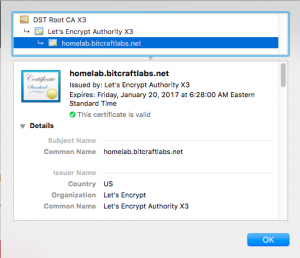 Assuming you already have a site setup (I'll do a how-to about that later), the following is how to set up an SSL cert in Ubuntu 16.04:

That will walk you through a setup process. Highlight the domains you want encrypted, agree to its terms, and voila!

That was easy right?

As for certificate expirations, your usual certificate from someone like Comodo lasts for 1 year. In this case, the certificates are leased for 90 days. Yes, that does seem short, but they have their reasons.

To test to make sure renewals will work correctly (which they should), run the following:

Apparently in Ubuntu 16.04 there is a bug concerning the email not being filled, you can just ignore it. It will still function. If that otherwise works, you can create a cron or systemd task to run twice daily the following command:

Certbot and Let's Encrypt works on more than just Ubuntu, it is supported on a wide array of unix/linux-based platforms (Not IIS if you're wondering), check it out:

**Edit** (10.26.16): I went to use Certbot on my DigitalOcean VPS that is running Ubuntu 14.04 with Apache and it didn't work... rather it required a little extra effort. Using the program works relatively the same, but installation won't work via apt as the letsencrypt package wasn't created for that build of Ubuntu. Instead, do the following: ```bash wget https://dl.eff.org/certbot-auto chmod a+x certbot-auto ./certbot-auto --apache ``` I recommend putting this somewhere such as /opt/certbot/ and then adding that directory to your (or the global) path.

Get the latest posts delivered right to your inbox

For starers, I realize I haven't posted up my current lab nor any of my setup as of yet. I'll get to that. Anyways, yesterday I brought home a nice XRackPro2 by Gizmac,

This site is in the works but I’m finally getting into blogging about my tech hobbies. I will be talking about my homelab and how to do things that I encounter. Those

Joshua Nasiatka
—
Did someone say free SSL certificates?
Share this

Stay up to date! Get all the latest & greatest posts delivered straight to your inbox